On Monday night I stopped at my sister's house to pick some pants to hem for my niece. When I got there I was told that the girls had gotten something for me. They slipped outside and came back in with this: 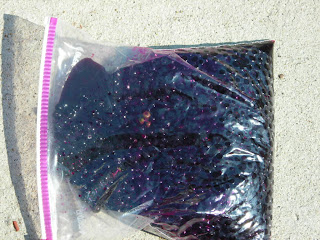 A bag of wild berries they had picked with the thought that I could use for dying yarn.
I had honestly never really considered dying yarn with wild berries. It seemed like a very tedious and messy idea to me. However, after being presented with such a gift from my nieces I figured I had better give it a shot.
I did a bit of online research, and the information available for using berries as dye was a bit sketchy, and described a fairly lengthy process, including days of soaking the berries to make a liquor before preparing a dye bath. I didn't want to spend that sort of time on it. So, I improvised: 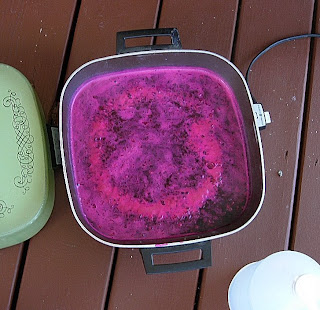 First I mashed the berries, then I put them in my dye pot, added water, and boiled them for about 1/2 hour.
When I felt as if I had drawn out enough of the colour I strained away all of the berry pulp. You can see that I was correct in believing this would be a messy venture. 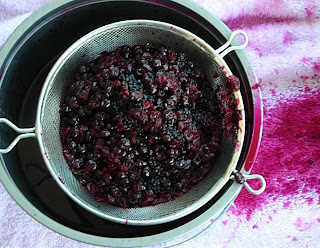 The strained liquid went back into the dye pot with some vinegar. There is probably a better mordant for dying with berries, but I don't know what it is, so I stuck with what I know. 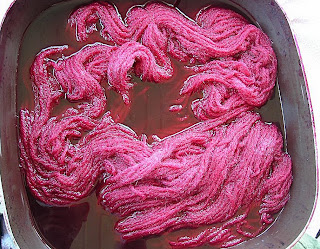 My natural coloured wool went into the dye bath, and simmered for about 40 minutes. I have to say that for the first 10-20 minutes I didn't really believe that anything attractive would come out of this dye bath.
In the end, I really did get a very pretty yarn in a vivid pink colour. I do find myself wondering what sort of rich purple I may have gotten if I had pre-soaked the berries, and allowed the wool to soak longer (I did this all in about 2 hours). However, I think I am done with the berry dying for 2008. 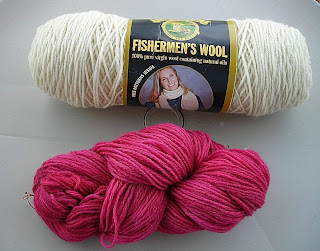 In the knitting world I have discovered that a simple project worked in the round is a great way to keep myself from fidgiting while doing my homework, and helps me get more reading done in a single sitting. Becuase of this, I do have a new project that I will be sharing soon.
Posted by Briley at 1:33 PM

You are such a good uncle!!! Will you knit something for the girls with the yarn?

I will be dyeing wool with mushrooms at one of my guild meetings...same process, maybe?

Wow, that turned out awesome. Let us know how it works up!

Can't wait to see the new project. Hope school is going good for you.

Yeah, that was messy but you really did get a pretty result.
Can't wait to see this project.
Hugs!

Great Job Brian -
Life is full of messy things!
Now you can make something beautiful out of that mess!!

That is a really pretty girly pink that you made from those dark purple berries! Your nieces will love it and maybe it will inspire them to start crochetting themselves!

I can't wait to see the new project that you're working on!

I think the color turned out wonderfully!!! I love blackberries and would have been tempted to eat them tho :P. hehe, Joansie is right you are a good Uncle. I asked my spinning list about blue berries but was told the color they produce would fade to a grey color instead of staying blue. sigh. The spinning list I'm on is talking about dying with black walnuts, since they are now ready to harvest off the trees, for nice brown colors. Will look forward to see the project you will be blogging about. :)

The berries actually make some lovely dye color! You are a great ucle! Oooo! If you want another expirement, I have some black walnuts in the back yard! I would rather see you color yarn than the squirrels bury them! Can't wait to see your latest project!