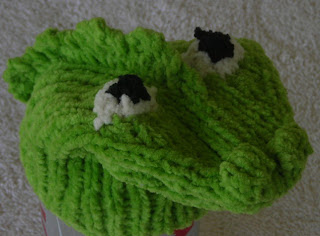 This is the first bath puppet I knit in Crystal Palace Cotton Chenille. I love the yarn, it's so soft and fuzzy, and it was just screaming to be made into bath puppets!

The dragon is definitly my new favorite, and I was asked to post this pattern quickly, so I think he's already a favorite of some others, as well.
You'll have to excuse all the random dots in this post. Blogger is refusing to allow me to space this post the way I want to, so I put those in to hold open the blank rows.
.
Materials:
Crystal Palace Cotton Chenille:
Lime green (1 hank should make 2 puppets)
white (small amount)
black(small amount)
.
Scraps of a smooth waste yarn (mercerized cotton works well)
.
US6 DPNs (set of 5)
.
yarn needle
.
stitch marker
.
Gauge: (not very important) approx 4 sts to the inch
.
Stitches/abbreviations used:
K- knit
STst- stockinette stitch (knit all stitches when in the round)
K2Tog- knit two stitches together
SSK- slip, slip, knit- individually slip two stitches knitwise, insert left needle into the front of these two slipped stitches and knit together
.
KFB- knit into the front and back of the same stitch (increase by 1 st)
st(s)- stitch(es)
WY- waste yarn
rnd- round
.
MB- make bobble- [K into front and back of stitch] 2x, [turn work and knit these four sts, turn and purl the 4 sts]2x, turn and knit the four stitches, pass the first 3 sts over the last stich knitted.
.
3 needle Bind off- holding 2 needles with live stitches side by side use a 3rd needle to bind off as you normally would, except each time you would knit a stitch from the left needle you will knit the next stitch from both left needles together, and pass the previous stitch over, as in a 2 needle bind off.

Special Instructions:
When WY is used in pattern, instructions will read (for example) WY K3. The 3 sts should be knit in the WY, leaving a tail of a few inches at both ends, and then those stitches should be slid back onto the left needle and knit again with the main yarn. If the WY sts cross over 2 needles be careful to return them to the correct needle after knitting them with the main yarn. These instructions will not be repeated in the pattern directions.
.
Cotton Chenille is not an elastic yarn! Cast on VERY loosely. I cast on so loosely I thought my bottom edge would be a mess, and it was still too tight.
.
Directions:
.
with green Cast On 28 sts-remember to cast on LOOSELY-
divide the sts between 4 needles, 7 sts to each.
Being careful not to twist the sts, join in a ring .
Place a marker after the first stitch knit to signify the begining of the round. This will be needle 1 , followed by needle 2, and so on.
.
Knit in STst until piece measures 2.5 inches
.
next rnd) K16, WY K10, K to end -this rnd creates the space for the lower jaw
.
next 4 rnds) K all
.
next rnd) K2, WY K3, K4, WY K3, K to end -this round creates the spaces for the eyes
.
next 2 rnds) K all
.
.
Begin Decrease:
.
rnd 1) needles 1 & 3-SSK, K to end. needles 2 & 4) K to last 2sts, K2tog
.
rnds 2 & 3) K all
.
Repeat these 3 rnds until 16 sts remain (4 to each needle)
.
Repeat rnds 1 & 2 of decrease
.
nxt rnd) K1, MB, K2, MB, K to end
.
next 2 rnds) knit
.
Using a scrap of waste yarn and a blunt end needle, thread yarn through all the sts and remove needle. Be careful to remember where the round started (stitch 1 of needle 1). Turn work inside out.
Pick up the live stitches onto two needles, 6 sts to each. The sts from needles 1 & 2 should now be on one needle, and the sts from needles 3 & 4 on the other.
Bind off all sts using 3 needle bind off. Cut yarn, and secure.
.
Lower Jaw:
.
Remove waste yarn. Placing live sts on 4 needles, and picking up sts from the sides of the opening you want to have a total of 28sts on your needles, 7 on each. Needle 1 should be in the same place it was when you were working on the head (bottom right of mouth opening) Place a stitch marker to mark needle 1.
.
Knit in STst for 3/4"
.
Begin to decrease using the same 3 rnd decrease as above, until 12 sts remain.
.
Repeat procedure for inside 3 needle bind off.
.
eyes:
.
remove waste yarn from 1st eye space. Using 3 needles you want to have a total of 10 sts between live sts, and sts picked up from the sides of the opening. For the eyes the orientation of the needles (ie needle 1) does not matter.
.
With white: K 3 rnds
.
With Black: K2tog around
.
cut yarn, thread through 5 remaining sts, cinch tight, secure yarn, weave in ends
.
Repeat in second eye space.
.
Spinal Ridges:
.
this piece is knit in rows seperately then sewn onto the back of the puppet.
.
with green Cast On 1 st
1) KFB
2) K all
3) KFB, K1
4) K all
5)KFB, K2
6) K all
7) K2tog, K2
8) K all
9) K2tog, K1
10) K all
repeat rows 3 through 10 until piece is desired length. It should start between the eyes and reach the base of the mitt. When it is long enough knit the last 2 sts together. Cut yarn leaving a tail long enough to sew piece onto puppet, pull yarn through last stitch, center piece along the top of the puppet and sew in place.
.
All ends should be woven in and secure. A forked tounge may also be added. See the directions in the silly snake pattern.
Posted by Briley at 9:59 PM

I fear that I will need to SLAY this feared creature one day! What a great idea, A little WATER will put his FIRE out! I love this one! I am so going to make it for my son!

love love it...now your tagged and come comment on my blog..http://pointbreezedesignsblog.blogspot.com

I want to make this adorable dragon puppet, but I don't quite understand part of the directions. On the decrease rounds it states to decrease until 16 sts remain and then repeat round 1 & 2. If I do that, won't I decrease more than the 16 sts I need to split between 2 needles? I'm confused. What am I doing wrong?

Sorry Constant- make that 6 sts to each needle for the 3 needle bind off. Had never seen that typo sorry!

I just made this puppet, it's adorable and my son thinks it's great! Thanks for posting the pattern.