In my last post I said I was going to post some photos of my favorite yarns from my month long spinning frenzy. Somehow I have lost/deleted several of my favorites, but I do have a couple to share. 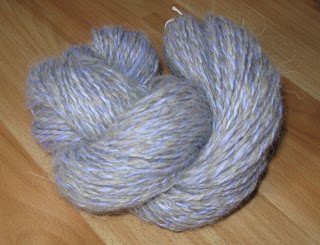 This one is probably my absolute favorite hank from the lot. This is a fingering to sport weight yarn. It's 2 ply, with one ply being natural silver alpaca, and the other lavender dyed angora. I had never spun angora before. It is a lot more work than spinning wool, but is so soft and squishy it was well worth it. I will definitely be buying more angora. Actually, I wish I could get a few bunnies, but that's not going to happen right now. I used to have rabbits, and always thought all that fur they shed was a nuisance. Ironic, isn't it? 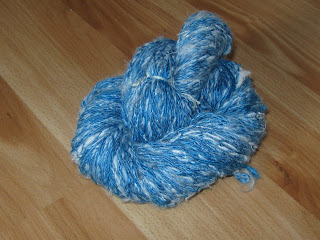 This is another I was very fond of. It's a blend of bamboo and micro fiber. I bought the microfiber at the New Hampshire sheep and wool festival thinking it would be fun for blending. The bamboo has been in my stash for quite some time. I blended the two together on a drum carder, but made sure that the two fibers were still discernible from each other, I wanted the texture differences to be apparent in the finished yarn. It makes me think of a glacier. It's incredibly soft, and shiny, but I don't think it will be the hardest wearing yarn I've ever spun.
I wish I had the rest of the yarn photos I wanted to post, but perhaps they will show up some day. 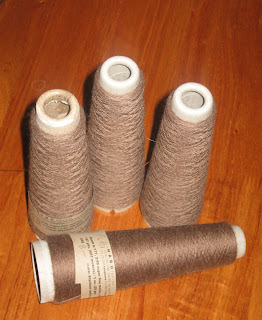 Since I don't have as many hand spun photos as I wanted I'll share a project disaster story.
A few months ago a co-worker of mine announced that she would be leaving. It was a second job for her, and was becoming too much. This is someone who has always loved my knitting, and has wanted me to teach her to knit herself a shawl. I decided to make her a shawl as a going away present.
I am very fortunate to have some beautiful yarn shops very close by The Elegant Ewe and Patternworks are both about a 20 minute drive. However, when it comes to lace weight yarns I am usually not thrilled with what is available, and often just spin my own.
This time I didn't have the time for it, and I decided I would have to make due with what was in the stores. I went over to the Elegant Ewe, and told them I needed a lace weight in brown ( my co-workers favorite colour for clothing). I ended up with Habu Textiles Super-fine Merino. Super-fine is no exaggeration, but I decided a double strand would work nicely. 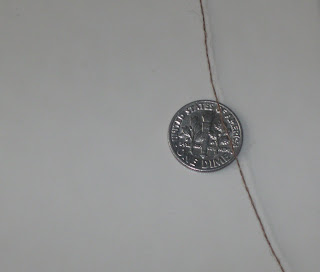 This yarn has an incredible 747 yards per ounce! Even double stranded it didn't feel very substantial, but I was on a timeline, and I had purchased 4 one ounce cones of the yarn, and was determined that it was going to work.
I started a pi shawl on size 3 needles, and searched through all my stitch dictionaries for the perfect lace patterns to put into each ring of the shawl.
It wasn't growing as fast as I had hoped, but I had three weeks, and I had knit shawls in less time. 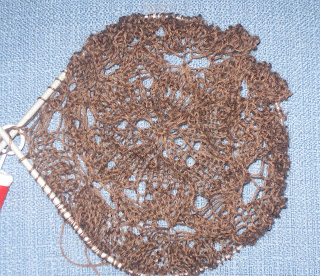 After about 24 hours (actual time spent knitting, not 1 day) I had a shawl the size of a bread plate, and realized that, at the very least I would have to knit the shawl half way through an increase round that Elizabeth Zimmerman had never thought necessary in her writings about the pi shawl.
Finally, I decided I had to admit defeat, and buy a heavier yarn. It would be quicker to buy a light fingering weight and start a shawl from scratch than it would be to finish this one.
(BTW- there was quite a bit of knitting worked after this photo was taken).
I went into work the day I decided to scrap the habu shawl, and was immediately approached by the intended giftee. "I've decided to stay!" she said, probably expecting me to be excited. Instead the exhausted/relieved exclamation of "Good, you don't need my damned shawl!" actually flew from my lips. I think I have to make her one now, anyway.
After this experience I thought back to the last shawl I started, which is now officially a UFO as it hasn't been touched recently enough to qualify as a WIP. I realized that I have quite a few project bags taking up valuable space. So, I decided this summer I am going to clear a few of those bags out. 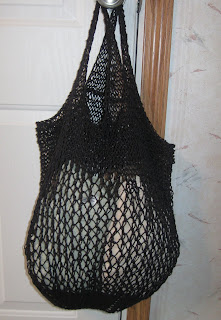 I started with this hemp market bag. I began work on this many months ago when I needed a mindless project to take along to some event. I loved the idea of it, and couldn't wait to use it. After about a week of attention it sat by my bed in a tote.
Well, it became my first UFO turned FO! Not a major accomplishment, but it's one less UFO.

I have also been trying to get some work done on the sand afghan on a regular basis. It's now almost 50% complete. However, this is one project that I don't mind having sit around for a while. I really love working on it in bursts. It gets boring, and I put it away. After a while I really do get excited to work on it again. Not many projects are able to renew my interests after sitting around for a while. 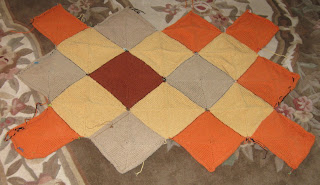 So, even with out constant attention I know it will be finished some day. Now if I could just get back to those shawls....
Posted by Briley at 8:53 PM

Nice to see you blogging again! :P I suppose I don't blame you for dropping the Habu shawl now that you don't actually *need* to knit it. I'm sure it would have been gorgeous though. I like the handspun yarns!

Oooh, that angora/alpaca looks SO SOFT!

Funny story about the shawl. It didn't need to be knit, so it wasn't cooperating. Karma? Kismet? I always get those two confused - LOL!

I LOVE the lavendar angora and silver alpaca! Just gorgeous!

So, for future reference: cobweb yarn and short deadline knitting... don't go so well together!

I just finished up a market bag too! Need to get pictures of mine so I can blog it. So nice to see a new post on here again too! ;)

Oh my gosh Brian, you have been busy!! I love that yarn, it is magnificent!! Love the tote, what pattern did you use? I'll be watching the shawl to see how that goes, it's going to be beautiful I can tell. :)

What a hilarious story!! I've tried the Habu fine and now only use it paired with something more substantial. :D

If you ever need a super quick lace shawl knit - do the Shetland Triangle Shawl from Wrap Style in a sock weight yarn. It takes about 2 weeks of part time knitting with impressive results.

That's too bad about the shawl...I sympathize with your frustration...but you meant well :)