Last Monday I was meeting a friend for coffee, and wanted to bring a project in case I was waiting ( I'm paranoid about being late, so I am usually extra early). While I was looking for just the right WIP to bring I realized that the only small(ish) project I have OTN right now is the primula shawl, which I've decided, after much tinking, is not a good project to work on while I might be easily distracted. So, I needed something new.

Luckily Mondays are my errand days, and I was traveling very close to Patternworks. It was the perfect opportunity to begin a new take along project. Patternworks generally has some wonderful odd-ball yarns in it's sale bin dirt cheap. This time was no exception. I picked up four balls of Classic Elite Classic One Fifty, two in "radish" and two in "pewter".

Now I just needed the small simple pattern conducive to on the go knitting. My next stop was the library. Where I picked up Marcia Lewandowski's Folk Mittens. 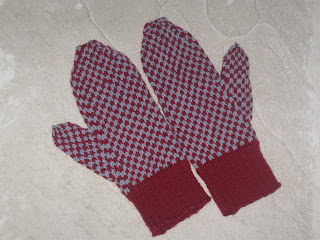 Here's what I ended up with. The Danish Fisherman's Mittens traditionally have two thumbs each, so they can be turned around when one thumb wears out, making them last twice as long. I decided I would risk having just the one thumb each.

The pattern was perfect, though. The stranded colour work kept it interesting, but the complete regularity of the patterning meant that I could work with out fear of error even in the most distracting environments. Actually, it was so perfect that these mittens quickly went from my take along project to my only working project. 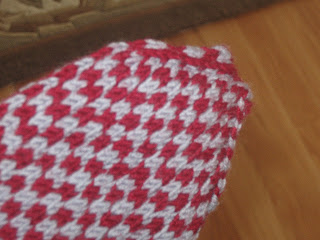 I knit the first mitten exactly as charted by Marcia, but I did not like the top. I never like rounded top mittens when I make them, so I should have expected it, but these were a bit too long as well.

I ended up ripping the mitten back to the middle of my pinky nail, and started angular decreased. I had to recenter the starting point of my rounds to get them in the correct orientation to the thumb gore, and this cause a kind of awkward looking red stripe. I decided to make this the left hand mitten, which would keep the stripe on the inside, and move the thumb gore on the next mitten to avoid repeating the stripe. It worked just fine. 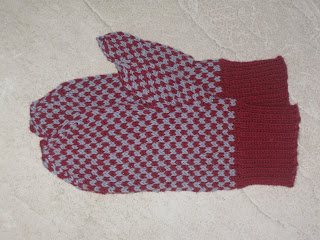 The mittens used up about 48 grams of the red, and 38 grams of the grey. I bought 100 grams of each, so I have enough for another set of mittens. I'm kind of excited about this, because this may possibly be the nicest yarn I have ever used. Okay, I think I say that about 90% of all Classic Elite Yarns, but this one truly is wonderful. It's super soft merino, but it is cable plied, which makes it firm, and strong. I can't wait to see how it wears. I see it becoming a staple in my stash.

These are fantastic. Thanks for the pattern and yarn recommendation. Okay... as if I didn't have plenty of things TBK.. to be knit.

Happy week to you!

Awesome. I love mittens. I've never actually knit with Classic Elite yarn (I know!), but I'm sure I will be soon because of Jared's book.

Nice! I love the colors together.

Wow, your mittens came out great! I bet with the stranded knitting they'll be super warm, too, this winter :)

Those did turn out nicely, they pattern for the colors is very interesting. I enjoy looking at color work, and have tried it, but it wasn't my thing ;P. I continue to enjoy looking at it tho :). I'm looking for a solid mittens pattern that can be done in a bulky yarn and I can felt for warmer mittens for this winter. If you happen to see a nice pattern like that give me a holler ;).

Great mittens! Can't wait to see the next pair!

Love the mittens, funny how the little projects end up being all consuming. Looking forward to the next one.