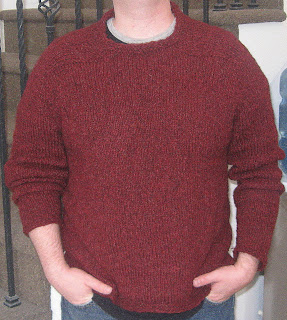 The Seamless Hybrid is finished. I used 7.5 balls of the yarn, which means I have enough of it to make a second sweater. Not bad for $15!
I wish the photos came out better, and I will probably try for more another day.
I followed Elizabeth's directions almost exactly. The two things I did differently:
I started my sleeves with less stitches than recommended. I like a usually like a snug wrist. Actually with this particular yarn I think a wider wrist would have been fine.
I brought up the front of the neck by decreasing a stitch on the front of each saddle after the shoulder shaping was done. I finished the sweater with out doing this, and the neck front hung way too low. So, I ripped back and added some extra rows to incorporate the decreasing. I'm much happier with it now.
I did get one MAJOR shock with this sweater.
If you read what I had previously posted about it you know that I started this project as something I could work on in the car, in the dark. I started it rather quickly due to this, and although I did make a gauge swatch I never washed that swatch. Whenever I buy yarn in the $1 bin at The Hub Mills store I expect that the yarn may have sustained some damage, or had been lost for a while. With this yarn I expected that it had been lost in storage, and possibly crushed in that storage. I think I was right.
After I finished the sweater, and was happy with the neck I put it for a soak in the sink. When I took it out 15 minutes later it was HUGE! I would say at least 30% larger than it was when it went into the sink. I was in shock. I never expected such a dramatic difference.
Luckily after careful blocking, and the yarn fluffing up as it dried the sweater is only a bit bigger than I expected. The sleeves ended up about 1" longer than I would have liked, and the rest of the sweater really still fits fine.
Lesson learned: Always wash your swatch!
Posted by Briley at 12:49 PM

It came out great!! I imagine it feels, or will eventually, like a favourite sweatshirt.

What a great sweater! The low cost of the yarn only adds to the beauty IMHO. Just in time for fall. Yikes..the incredible growing sweater.. that would have had me in a panic. Looks great. Thanks for Sharing.

Lookin' good! I'm glad it worked out, even after the "growth scare". I always wash my swatches, but sometimes I think it takes the weight of a whole sweater to show a noticeable difference. That's what I tell myself, anyway. ;-)

I've been knitting a long time and this is the first time that I've ever read about washing a swatch. You sweater looks terrific, too!

Great sweater and what a bargain on the yarn!

It looks great! I hope you're not too upset with the yarn growth. Another lesson I've learned is that if you're going to knit in the round, you should swatch in the round. (or maybe that's just for me.)

Wow you knit that up quickly! It looks fabulous too

Sweater looks great! I LOVE the color too! Great job!

With it's simplicity that really is a great looking sweater! What book Of EZ's is that in?

I love finding bargins with yarn, I probably wouldn't have thought to wash the swatch either. What was the content of the yarn?