So, I have not gotten back into blogging as regularly as I had hoped, but I do have a couple FOs to share: 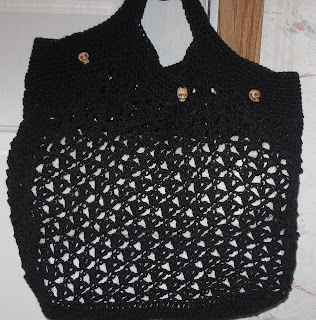 This is a tote bag I made for an exchange in the Peaches &Creme group on ravelry. My partner was skullsnbats, and said those were two of her favorite things.

I used my Meredith Tote pattern, and America's Best Cabled Cotton (which is my favorite for totes and market bags). I added some skull beads to the top of the bag to personalize it a bit more to my swap partner's taste.

The tote pattern is currently unavailable, but should be in print again soon. 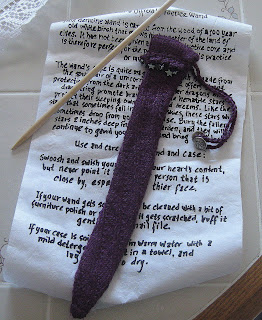 This is a gift a made for a friend's little sister. She is a huge Harry Potter fan, and I thought a magic wand might be fun for her, and was very easy to make out of a birch knitting needle. The wand case was knit free styke out of Patton's Silk Bamboo. I added small hematite stars to the trim, and pewter dragon buttons to the draw string to add to its magical appearance.
A roll of rice paper made a perfect scroll to roll around the wand inside it's case. I've never actually met the recipient, but am told she was quite excited about this.
I have a new project OTN, started on a road trip to Chicago last week, but I haven't taken a photo yet. I'n not sure how well it is turning out. I brought yarn, and needles, but didn't think to bring any patterns with me. The yarn was purchased for a pair of mittens for my niece, so I just started free-styling some mittens. Free styling colourwork with out any pens/paper to take notes is not the easiest thing. So far I am happy with the look of the first mitten (didn't gat far) but I am a little concerned it will be too small. I think I will put them on hold until I can have her try on what I have done. 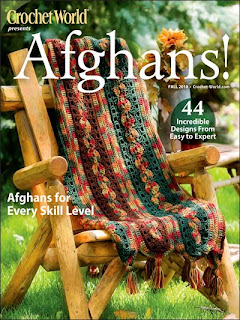 I had a fun surprise yesterday. While in Borders with my brother, I found this magazine. I have a pattern in it, and didn't know when it would be hitting the shelves.
My afghan (I think it's on page 58) is an expanded version of my Iris Baby Blanket (scroll down), the pattern for which had not been published previously. This version has larger motifs, and directions for two sizes. I also worked it in a more subtle colour sceme. Unfortunately I don't have a copy of the nice magazine photo, yet. I do have a picture of the blanket just as it was finished: 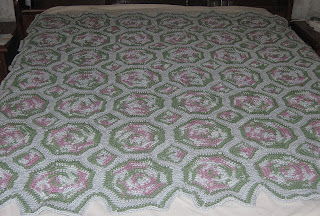 Wow, congrats on the published pattern!

Congratulations on being published - well deserved too,

Hi there!
Your projects are great. That bag is perfect!!!

I LOVE Harry Potter too..

and well the blanket is a treasure.

Congratulations on your published pattern...your blanket is awesome!!

What a cute wand holder :), I do imagine she was quite pleased with it, and it's in time for the new Harry Potter movie that is coming out in November ;). I love the market bag, do let me know when it's back in print, it's a awesome looking pattern. :) Good to see you blogging again.