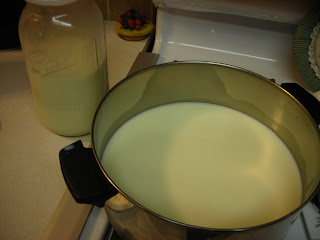 Although this blog is usually about knitting or other crafts I'm going to talk a bit about food today. This post is coming at the request of a friend who, when calling and asking "what are you up to?" was a little surprised to get the answer, "I'm making cheese."

First a little background, since it is the stuff I find interesting:

This past summer while taking the road trip down to Pisgah Yarn & Dying, Gerry introduced me to Barbara Kingsolver's book Animal, Vegetable, Miracle. The book is the 1 year chronicle of an American family trying to eat only local foods. The book also talks about reducing your carbon footprint by using less fossil fuels to obtain your food.

Before this book I never thought about how much oil was being burned up by industrial farming, and shipping foods around the world so that fresh vegetables are always on hand, no matter what the season. I'll tell you, I can not stop thinking about it now. It's not that I never plan to eat a pineapple again, because it has to be shipped from Hawaii, but I do plan to make my food purchases more thoughtfully, and support local, and organic agriculture much more purposefully than ever before.

So, I found a local farm to put me on their weekly customer list, and I now have a gallon of milk to pick up from them each Monday. I made the arrangements for this last Tuesday, and after I had arranged to buy a gallon of milk each week I realized that I consume just under a quart.

In the book, Barbara had talked about "The Cheese Queen" Rikki Carroll, who started New England Cheese Making Supply Company, which is located in Western, MA. I had thought about trying to sign up for her one day cheese making class, then realized she sold it on DVD. I decided to go that route, but with so much milk coming my way so quickly I went out to buy her book immediately. AS it turns out, I can not obtain vegetable rennet locally, so I will have to order it. In the mean time I am making this simple soft cheese with this weeks excess milk. 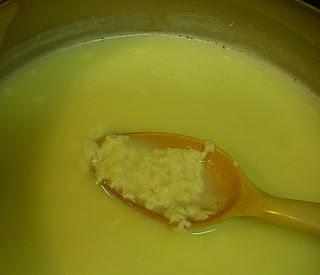 The milk is slowly brought to a boil. Cultured buttermilk is added to the hot fresh milk, and curds develop.

The whey is strained off from the curds, at this point you have cottage cheese. You can keep it this way, or hang it to continue to strain for a more firm, solid cheese. That's what I did, I actually weighted/pressed it for a couple of hours. 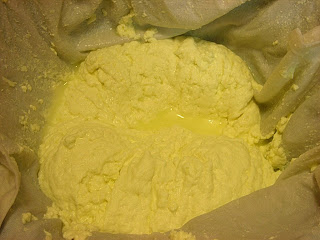 My finished cheese is somewhere between the consistency of a very firm ricotta, and a soft creme cheese. Now it's chilling to be made into an entree tomorrow. 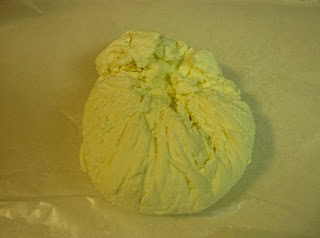 While I was making the cheese I also made some seitan. For the carnivores- That's isolated wheat protein (gluten), and makes a great vegetarian entree. The wheat was not local, but buying dry powder certainly does save on fuel over shipping a high-water-content food that needs ref 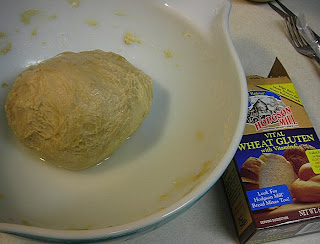 The seitan starts with a box of "vital wheat gluten" marketed as a product used in bread making (although you could isolate the gluten from plain old flour). A little water added makes this into a big rubbery ball of dough. The dough is kneaded then allowed to rest for a bit, and finally simmered for an hour. 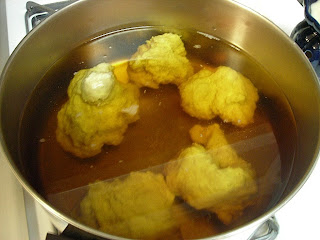 When the dough first goes into the pot it doesn't really look like much, just a couple puny blobs, but it puffs up quick. Halfway through cooking I thought my seitan was going to blow the lid off the pot. 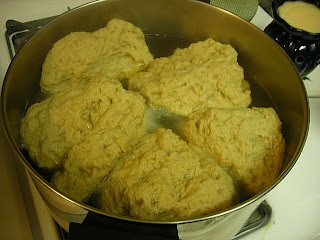 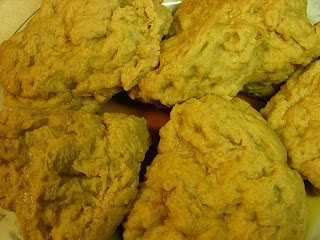 Again, this is now being chilled for meals later in the week. Mondays are the only day that I can really get into complex cooking in the evening, so it's nice to get ready for the week ahead.

Okay, and just so the people who read this blog regularly have something they will be interested in: 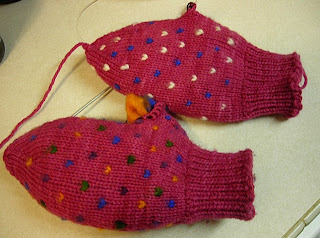 I have a mitten from the 2nd set of thrummed mittens nearly completed. I had started this before I got Maureen's advice to keep the thrumms really puffy, and did make them much smaller. As it turns out I can already tell the set with the enourmously pouffy thrumms will be superior. Live and learn.
The second mitten from the first pair is almost done, but I have run out of blue roving, and will have to dye some more. I had hoped to do that today, but the days are just too short this time of year. Maybe tomorrow....
Posted by Briley at 9:02 PM

Cooking the old fashioned way (like in yester-years) is kinda fun and gives us a sense of how difficult things were before the modern conviences, not that the modern ways are better, just faster. But still, it's nice to know how to do all of those things and to feel like you are helping to keep things better for the planet.

You are almost finished with the mitten, just the thumb it looks like :). They are pretty - who will model them for a finished picture?

I'm so excited that you are making cheese. I made some for the first time last year. It's an interesting process.

You are so multi-talented!!!! Love those mittens!

Man, you continually cease to amaze me. Knitting, spinning, dying, designing, now cheese making! Wow. It has to look better in person, LOL. And I bet it tastes sooo good. I love cheese.
And the mittens are cute too.

Hey that seitan is like the cotton yarn in my house..add water and boom!! Now as an entree how do you eat it?? Do you dunk it into the gravy of a delicous beef stew?? ONLY KIDDING!!!

Wow! That is all so interesting!! I used to get milk from a farm when I lived in Hopkinton and for a while used what I didn't drink to make my own butter. It was really labor intensive. So I'm really impressed that you're actually making cheese!

and the mittens are lovely. I'm sure they'll be a big hit.

Mittens look great! Love Barbara Kingsolver too. I saw an interview with her and her local concept a few months ago. Glad the word is getting out to the people! Funny that you are making seitan. I have the recipe pulled, but haven't had the chance yet. Maybe today since I am home with a snow day. I have never made it, so I am happy to see you post the pictures for it!! Now what are you making with it?