The title of this post is really directed at Melanie, who says I am driving her crazy not posting pictures of my recent knitting.

Recently I shared a photo of one of my secret WIPs with Melanie; it was a flat piece knit from the center out (and that is all I will say about it at this point). She told me she had never knit anything in this fashion, and would like to try. So, I quickly typed up a basic pattern for a round dishcloth and sent it off to her.

Last night I was looking for a quick, last-minute addition to a gift I will be giving later today, and decided a washcloth with a nice bar of soap was the way to go. Since I was deeply involved with my latest non-knitting obsession (a woman I work with just loaned me 4 seasons worth of Stargate-SG1 DVDs) I didn't want to have to look at a pattern, so I decided to use the same design I had sent off to Melanie, with one exception, I changed the bind-off to look more like something I have been desperate to see lately... the sun!

So, here is the cloth: 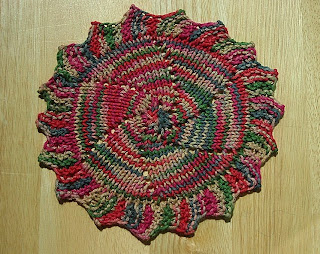 I know the colours are not very sunny, but this was a cotton yarn I had been dying to see knit up, and I really like the colours.

Now for those of you who are accustomed to finding free patterns here, I will throw you a bone as well...


Cast On 6 sts, and divide evenly among 3 needles. I used Emily Ocker's Circular Cast-On, and there is a wonderful pictorial demonstration here.


continue in this manner where every odd numbered row is knit, and every even numbered row has 6 YO increases placed 1 stitch further apart than they were in the last increase row, until you have 24 sts on each needle for a total of 72 sts.


You are now ready for the garter stitch edging. If you, like Melanie have not knit a flat piece from the center out before this edging will be great practice. It is a great way to end a circular shawl, tablecloth, or blanket, as it allows the edges to stretch much more than just casting off the edge would.

You should now be at the first stitch of your round, however if you choose to change yarns and knit your border in another colour you may start this anywhere.


Repeat rows 2-9 until all of the original center edge stitches have been decreased into the edging. You should end on row 9. Bind off your last 4 sts, and sew Bind off edge to cast on edge.


Before I end for today, I have one last thing to share. Remember the BFL roving I got from Witchypoo? Well, I have spun up one of the braids, the blue-purple one, and I just love it! I bought this because so many hand spinners seem to make a fuss about the BFL wool, and now I know why. This hank is about 180 yard of a DK-ish yarn- I actually tried to go a bit more thick/thin with this t 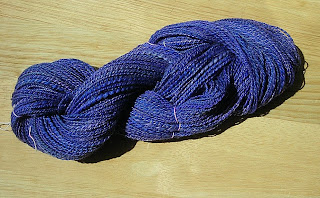 han I usually do- and I do have some singles left on the bobbin, and a bit more to spin up.

I think it looks wonderful in the photo, but not nearly as great as it does in reality.
Posted by Briley at 11:44 AM

The dishcloth is wonderful and thanks for sharing the pattern. Just hearing, reading, seeing the word "sun" brightens my day! The yarn looks great!

Okay, now I gotta busy with that cloth so I can try this edging. It totally looks like the sun!
See, all my whining actually paid off. lol :P
That roving really turned out gorgeous. That is the bluest blue I've seen in a while. I don't see how it could be prettier in person but I believe you.
Thanks for the pattern and the help...you rock!!

OMG I love that dishcloth and you had to include the pattern, not fair, I want to pick up needles and knit it, but I really need to finish my Widdershins. Geez Brian you are such an enabler ;-)

I don't know where you find the time to do all this. The dishcloth is adorable - are you going to put it up on Ravelry too? please please...

Thanks for the compliments on the BFL too - but it looks so much nicer spun up.

Love the dishcloth pattern! Good luck working on your secret project! Hope you are having a great week!

That sun cloth is beautiful!! And you fiber is to die for!! I am in awe of your spinning ability.

Thanks os much for the pattern - I'll definitely use it.

That blue handspun is to DIE for!!

I'll have to give that pattern a try, but I'll let you know up front, I hate knitting with double pointed needles :P. I like the blue, (I love that it will enlarge it so you can get a good look!) What weight is it? Any pattern in mind for it?