More Details from the Weekend

Last night I was still tired from the weekend, and there was so much I wanted to blog about. I decided to save some of it for today.


My birthday was Saturday, and I received a couple of unique gifts I wanted to share with everyone.

Some of you already know that I love to listen to old radio theater. 20-some years ago I had bought a record at the local used record shop. It was a collection of old radio plays from the "Skippy Hollywood Theatre" I loved that record, and have often said I wished I could now find it on CD. So, when Gerry pre 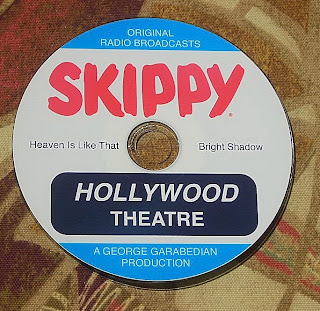 sented me with this:

I was amazed, and had to know where he found it. Well, it turns out that he didn't purchase it. He dug my old record out of storage, and his friend David re-recorded it, cleaned up the sound, and re-created the cover art to fit on a CD cover! I can't even believe David did all that. It was such a wonderful surprise. And, since I was making a road trip on my own the next day I got to listen to it twice!

[If you follow the link to David's business make sure to check out his blog. There are some great product reviews on it] 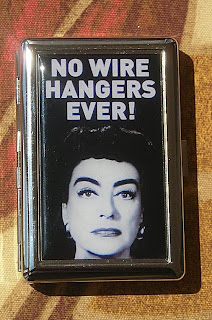 with this. A Joan Crawford cigarette case. I don't think I will ever look at his with out getting a good chuckle.


Now moving on to a section of my trip that I skipped over entirely last night.....
I visited yet another yarn/fiber shop I had been wanting to get to for quite some time. The Fiber Loft in Harvard, MA. It was a rather large shop with a street level store front that had all of your LYS stuff, including a wonderful selection of needles. They had 6" Brittany DPNs in a wide range of sizes -I love those! There was also a great yarn and book selection. Then upstairs there were three more rooms. There was the yarn close-out and spinning room, and there were two rooms dedicated to coned yarns that could be purchased by the cone, or wound off and purchased by the ounce. It really was a fiber artists wonderland. I actually found myself looking over their large selection of hobby looms. I didn't get one this time, though. I did walk away with a beautiful merino/silk blend roving.
The photo doesn't quite do it justice. The silk portions are really a creamy white, and the blue is a touch softer. It looks like a perfect summer sky, with little wisps of fluffy clouds running through it. 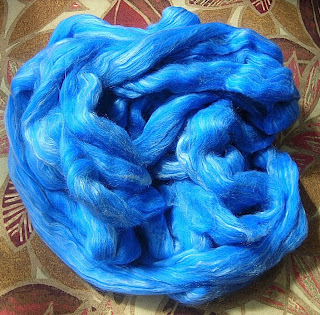 Okay, now on to some crafting I have actually gotten done recently.

Back in November I made a vegetarian cookbook for my SP11 Spoilee, Maureen. Maureen and I are both vegetarians, and I thought it would add a fun touch to her final package. I had always wanted to try some sort of home book binding, but her book was my first attempt.

For the recipes in the book I used many of my own, and quite a few of Gerry's (he a vegetarian, too), but I also asked several of my friends, and online friends for a recipe to add. Those who provided one were promised a copy of the book.

Well, I finally got (most of) them done. I had to reformat the pages to fit more recipes on them. The original book was one recipe to most pages, and had the recipe printed on a solid coloured paper that was then pieced into a decorative background. I just couldn't do that another dozen times! I was very pleased with the new formatting of approximately 2 recipes to a page, and double sided pages (I left the back of all pages in the original blank for notes/recipe alterations). They made for slim, but attractive books.
For the copies I used some decorative printed papers to make each cover unique. I really liked the idea, but if I were to ever do a project like this again I would not use these papers. They were a bit too glossy, and I think eventually they will all bubble.

It was fun to do, though, and as I got used to the Stab binding I was even able to experiment a bit, and get some fancier lacing done. 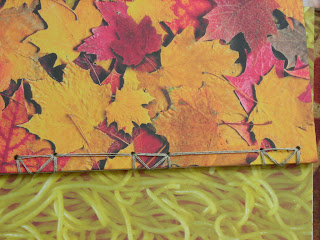 I was one of the fortunate individuals to get a cookbook from Brian. He did a great job. He didn't tell you that he has another present coming from his brother and I've seen pics but I'm keeping it a secret.....tee hee!

Aww...I'm late but Happy Birthday!
Those are awesome gifts and more special considering the thought that went into them.

I love those cookbooks. That's also a pretty special gift. That wood look cover is perfect with the binding. I'm sure those will be appreciated.

What wonderfully thoughtful gifts! I'm such a pushover for someone who takes the time to find/create "the perfect gift".

The cookbooks are great! Such a good idea!

Happy Belated birthday sweetie. I so wish I had known it was your bday. I am also one of the cookbook recipients. I love, love, love it.

I love the idea of that CD what a wonderful, thoughtful gift.

I forgot to tell you that I made your
little sun cloth over the weekend.
Thanks.. it is great.

What labors of love - both the CD and the cookbooks.

I'm new to your blog, but all of your work looks fabulous, especially the needle cases (and lucky me, I won one!)

We have a small knitting group at work, and Elaine finds contests and always wants all of us to enter them. I always feel stupid entering but this time it paid off in 2 ways. I won a prize and I found out about your blog! Thanks again.

Glad to see that you got your recipe books completed. They ame out really well! I know I love mine! Hope you are having a wonderful weekend!

Happy happy birthday (drats - belated!) So glad you had a wonderful and creative day... the little books are so beautiful, BTW. Love them!

What wonderful and thoughtful books you have made :o)

When I first read "No wire hangers ever!" I thought it was a positive statement about legalized abortions.
When abortions were NOT legal, the "home-style" way to have one was to use a coat hanger. And they were no doubt made of wire.
But then I read your script and couldn't understand why you were laughing.

It has taken me some minutes to figure out why you would laugh over the Joan Crawford cigarette case.
Are you ABSOLUTELY positive it is referring to not stretching knitted garments? Which is the only other way to take that caption I can think of.