This past weekend was the NH Sheep and Wool Festival. It was my first sheep and wool festival, and I'm glad I started with one of the smaller ones. Even though New Hampshire is not as big as Rhineback, or the Maryland sheep and wool festival there was so much to see for a newbie like me that it was almost overwhelming.
I arrived just before 10 am on Saturday morning. The festival had opened it's gates at 9. It was not yet crowded when I first arrived. First on my agenda was to locate the booth for The Irish Ewe, my friend Deb's Shop. For those of you who don't know, I met Deb at the Fryeburg Fair in Maine last fall, and she gave me my first taste of spinning wool. In November, when I had my own wheel, I trekked up to her shop for lessons.
This weekend Deb was a very proud teacher. When I showed her the shawl I was knitting out of my hand-spun lace weight she couldn't believe it. She kept telling people to go look at my yarn, and shawl. It was my 15 minutes of fame. I guess I have progressed more quickly than I had 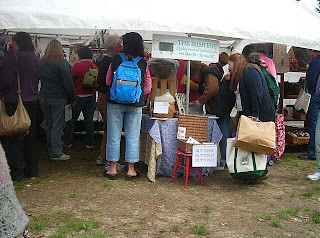 Just a few minutes after I found Deb her booth started to fill up. I took a picture for her, since her camera wasn't handy. Little did we know that this was merely the calm before the storm. For a good portion of the day Deb, and her daughter Dagny couldn't keep up with all of the people coming through to buy their rovings, and yarns. [If you are unfamiliar with their shop you have to check out their custom spun, organic Irish Aran Yarn] I spent a good part of the afternoon cashing out people's purchases just so they had time to answer questions, and help people find the products they were looking for. 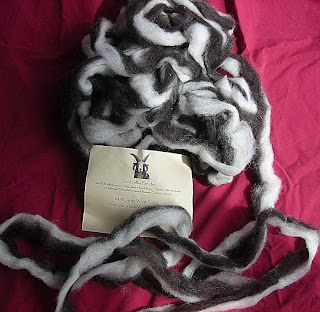 My first purchase of the day was from the Irish Ewe. It was some roving from Deb's Jacob sheep. Deb doesn't actually know this, but this fleece is the real reason we met. I saw it in her booth at the Fryeburg fair, and loved it so much that I thought I absolutely HAD to have some. I knew nothing about spinning at that point, but there was supposed to be a drop spindle demonstration in the fiber house shortly. So, I thought maybe I would stay for the demonstration, and bring home some of this wool to spin up. Well my constant glances over in Deb's direction finally got her to come over and start up a conversation. I never did buy the roving that day, but I have some now!

Luckily I did get to get out and walk around the festival a bit before it got too busy, and make some other purchases. I had a mental list of things I wanted to find, but I also wanted to see as much as possible before I started making purchases, so that I could prioritize where my $$ was spent. The first booth that tempted me away fr 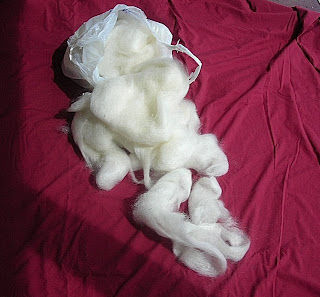 om that plan was West Elm Farm. As soon as I saw the fibers there I knew I had to have some.
Because they were my first purchases of the day I tried not to go overboard. You never can tell how many "must have" things you will find. I settled on some white mohair roving, and some grey Icelandic roving. I got 10 ounces each, and later really wished I had gotten more. 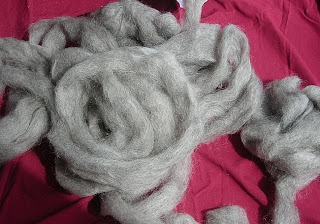 I tried to go back at the end to get more of these rovings, but I couldn't remember where he was located. Luckily I mentioned that I was holding back because I hadn't seen everything yet, and he told me that I could contact him any time for more. Because I foolishly lost the contact information from the woman who sold me that wonderful mohair/merino roving at Spa, I was ve 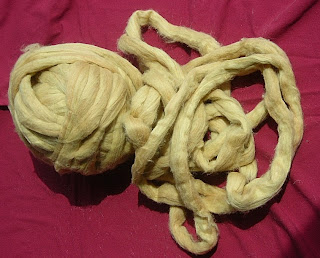 I made one non-woolly purchase. This is 7oz of organic green cotton. I had been wanting some colour grown cotton for my stash. Who knows if it will ever be spun up, because spinning cotton is seriously tedious work, but I am glad to have it for when the urge strikes.

My final, and perhaps most exciting purchase of the day, was this grey mohair raw fleece. 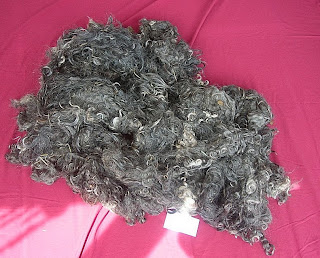 I had wanted to buy a completely unprocessed fleece just to have the experience of working a project entirely "sheep to shawl" as they say. Of course, in this case it will be goat to shawl. This was marked as two pounds, and I paid $12 for the whole thing. Deb tells me that coloured angora goats are very hard to come by, and it was a great price. However, I really think it is much more than 2 pounds. The total of the other fibers I bought was 31 ounces, and I had all of that (and a few odds and ends) in one bag, and the fleece in another, and the fleece felt much heavier. We'll have to see what it yields once I pick the grass and poop and other yucky stuff out.
I plan to blog the whole process. I think it will be fun to have a photo record of the whole project as it progresses.

My one disappointment of the day on Saturday was that I did not get to meet one of my ravelry friends that was there. I had sent Sophia a message in the morning to say what I was wearing, and that the best place to find me would be at the Irish Ewe's booth. I got a message from her that night saying that she made several trips to the booth to look for me. My guess is that we were probably with in a few feet of each other at least once, but either didn't recognize each other, or simply missed each other through the crowd. I was sitting in the back corner taking $$ most of the time.

Saturday ended with a nice dinner at Margarita's in Concord. I had actually never eaten there before, and was very pleasantly surprised to find a vegetarian section on the menu. I had cheese enchiladas, and they were yummy!

Sunday morning I had a voice mail message left by Deb the night before. She had left her cell phone charger plugged in in my car. She wanted me to mail it to her. Since I really didn't like the idea of her being so far from home, and have that long commute back with no phone, I decided she had given me an excuse to run back to the festival in the tiny window of free time I had on Sunday. Since it was Mother's day I had Mom in tow. I told her I wanted to get a picture of her with an alpaca, but she's too frightened of large animals. I told her the worst that would happen was that the alpaca would spit at her, and she found no comfort there.

As we were leaving I make a mad dash to try and find the West Elm Farm booth again, with no luck. However in that few minutes I did run into a ravelry friend Thadsoule. he had sent me a message to let me know he was going to be there Sunday, and what he would be wearing. As I took a corner I noticed the "cool boys knit" T-shirt he described. I did stop to introduce myself, but unfortunately really couldn't chat, as I had left Mom in line for snacks, and we were cutting it close to make it to family Mother's day festivities. It was fun to see him face to face, though. perhaps we will cross paths at another fiber event.

Well, I'm off to pick poop out of mohair. I know you are all jealous!
Posted by Briley at 12:52 PM

How awesome that you got to go to NH S&W. One of these times I need to get up there and go. I'm hoping to be at Rhinebeck this year.

Glad you got to go...sounds like an awesome day. That black & white roving is great!

Dang...too bad you don't have a "poop picker". lol

Sounds like a fun-filled day with lots of great purchases....and great weather as well. What more could a knitter ask for!

you are so going to love spinning Deb's Jacob roving - it is really nice... and that grey mohair! That looks gorgeous and well worth all the effort.