Another month has passed.....

with out a post. I really wanted to be better about posting, but I really have been busy.

I mentioned in one of my last posts how I was going to be a vendor at the Squam Art Workshops. Well, I mostly blame that event for my not posting. I was spinning and dyeing my but off for an entire month. It really was a wonderful experience, though (both the event itself, and all the preparation), and I would do it again, but I'm glad I will have some down time before I have to.

Since I was spending so much time spinning, I finally decided to try many different things I had been meaning to try. I really feel like I am a much better spinner now than I was six weeks ago. At some point I will sort through pictures of different yarns and share them here. Right now I will show you a photo of the booth Lynne and I had there. 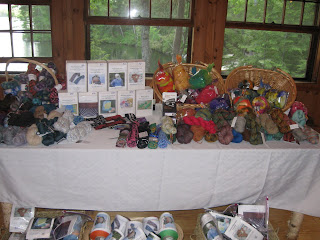 The table we ended up using was not the original one assigned to us. We were originally given a round table two spots away. Annie Modessit was originally supposed to be in this spot, but when she saw Lynne & me bringing in all of our stuff she suggested we switch so that our fiber could be spread out more for people to touch & feel. What a sweet woman she is!

Make sure to check out the view of Squam Lake from the windows behind the table. The setting was georgeous, and I definitely recommend checking out the workshops if you ever have the opportunity. 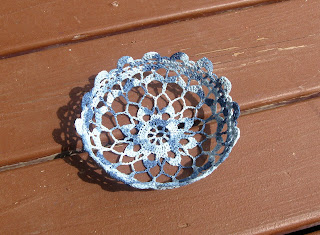 Now on to some of the projects I have been working on since my last post. I won't get to them all today.
Here is one of my favorite recent FO's. It's the Filigree Bowl by Linda Permann. I made it with Pisgah article 960 (size 5 crochet cotton) in faded denim. This was a super quick project I made in one afternoon. It needs a fabric stiffener to help it hold it's shape. Once dry it's a beautiful piece to display. I use it as a catch all for my keys & phone, and other items by my front door. 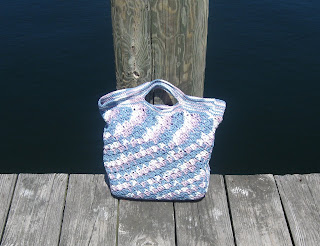 The Meredith Tote is the most recent of my yarn & pattern kits through Pisgah. I took this picture on a dock in Meredith Bay, and decided to name the bag after the location.
I think this will be a great bag for a day at the beach. It's lacy enough to allow air to get in to wet swim suits or towels, but solid enough to keep everything in it's place.
This sample was made by Debbie Carey in Ohio. Thanks Deb! 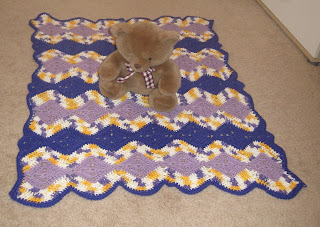 I had mentioned before that I was in the process of making several baby blankets. This one is my favorite so far. I'm calling it Madison, after it's recipient. The pattern is still with it's tester right now, but it should be ready for a kit soon.
I have one more project to share today, and it's not knitting, or crochet, it's sewn. For the longest time I have been wanting to update my bedspread. I've been using the same beige down comforter for years now, and I've really been longing for a change. 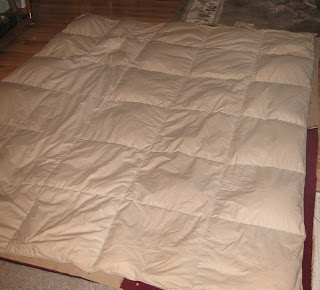 Here it is. There is nothing wrong with it. It's just old and blah. The problem is that I really love sleeping under it. It's light weight, but really warm, and I hate to get rid of a perfectly good down comforter just because I am bored with it.
Last night I decided to give it a make-over. I had stopped into the Fabric store to price a few different fabrics I had in mind. My original thought was dupioni silk. Unfortunately they didn't carry it in the colours I wanted. To get the colours I wanted I would have had to mix silk and polyester. That just feels wrong.
However, all 54" decorator fabrics were 50% off, and it was the last day of the sale. So, I decided to go with a sueded fabric that came in the perfect colours. The problem was I didn't have time to go home and take measurements. So, I had to guess on the yardage I would need. 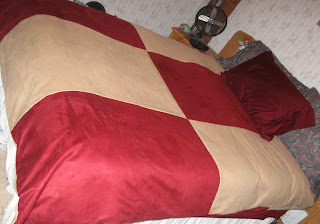 I took a guess that I thought would give me plenty of fabric for the cover, and I hoped enough to make a couple of pillow shams.
Here is my bed right now. The front worked out exactly as I hoped. As for my guess on the yardage...
Well, I had to use every single bit of the fabric to make up the back of the back of the cover. Literally, I threw away only the tiny trimmings that resulted in squaring the edges of the pieces. 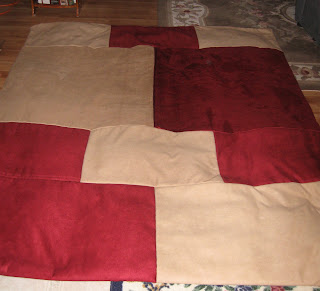 You can see the back just came together. There is even a tiny bit of the woven selvage of the fabric peeking through one of the blocks. However, I do love it, and may even have to go back and pay full price for a couple of pillow shams worth of fabric!

Glad you had fun at Squam! YOu had a great table of goodies! Love the new cover and the fun crocheted projects too. You have been keeping yourself very busy! Glad things are well with you!

You've been a real busy beaver! I love all the items with the bowl being my favorite!

That's really pretty. I wimped out and just bought a duvet cover from Building 19.

Looks like you have been up to some good work! Isn't Squam lake and Meredith lovely? Wish I could have gone... You sure did work your but(t) off one of your t's fell off ;-P
good to see you back, Jan H (MA)

Oh, wow! Everything is such a work of art! I love the crochet bowl & the baby blanket. And...I love the new life you gave to the comforter. It's just beautiful!

I'm glad to know that you're OK & that you've been busy.

Squam was loads of fun and I see you are still busy as ever. The coverlet is gorgeous! And love the bowl/blanket and bag too!

I'm still spinning up a storm for some reason, the knitting mojo is on hold. I spun up that Border Leicester we go up at the NHSW Festival - in laceweight - it's lovely!

See you soon I hope.

Oh my gosh, all that beautiful yarn!!! I hope you had a great time, I'm jealous that you got to spend all that time spinning!! You have been up to much more than spinning tho I can see by your pictures, you are so diverse, so full of talent!!!

You have been busy. Your booth looks gorgeous!! I hope you did well!

The bedspread is awesome. I really like it. Great job, as usual.

What a great post! I loved seeing all that you've been up to. ;) The yarn looks fabulous too!!

ohhhhh ahhhh...the bowl is beautiful...how did you apply the stiffener? did you drape it on a balloon or bowl? how long did it take to dry? LOVE the duvet! Oh it looks so soft!!!!